CORIN REYBURN (she/they) is the pen name of Kristin Yuan Roybal, forged as a representation of ethnic ambiguity and the non-binary. “Yuan” (袁) is their mother’s maiden name. “Roybal” is Spanish for “Red King.” “Reyburn” is the name of a redshirt who was killed on Star Trek.

Corin is a writer from Northern then Southern California, though they have never really found location to be a strong indicator of their identity. They teach creative writing and writing composition, and earned their M.F.A. in fiction from Oregon State University. Reyburn’s work is featured in places such as Lady Churchill’s Rosebud Wristlet, Mojo, M-BRANE SF, Subtopian Magazine, The Molotov Cocktail, Jersey Devil Press, and The Gateway Review: A Journey of Magical Realism, and they co-produce the speculative fiction podcast SubverCity Transmit. Reyburn served as the fiction editor for 45th Parallel magazine for its 2019-2020 issue. 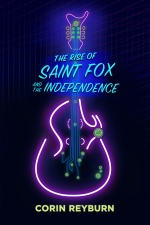 Corin’s debut novel, The Rise of Saint Fox and The Independence, was released in 2018 by Unsolicited Press. Reyburn is currently at work on two projects, a sci-fi novel which takes place in a high-tech agricultural society in a galaxy far far away, and slipstream novel about a genderqueer tech geek who experiences an accidental spiritual awakening.