Just a quick announcement: I’ll be signing copies of my book, The Rise of Saint Fox and The Independence, at the AWP Writers’ Conference in Portland, OR this weekend from Mar. 27-30. Will be at Unsolicited Press’ booth, T9096, on Friday at 2pm amidst the hustle and bustle of the Bookfair. Copies of the book will be available for sale. Feel free to stop by and say hi!

I have a little interview up with Freya Pickard on her imaginative book blog Dragonscale Clippings, where she features authors that have new books out in her escape pod simulated scenario known as EPod interviews.

Read on to find out how I answered the question of what 5 items I would take with me into an escape pod as I flee certain peril, drifting in space with nothing but a hope and a song…

Who is inside the lastest escape pod to arrive? If we just open the door – sorry, it’s a bit dented… And the oxygen levels are showing as severely depleted… Out fall two cats and – who’s this? Welcome back to civilisation, Corin Reyburn! What did you take with you? [Read more >>] 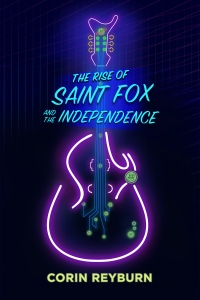 Today The Rise of Saint Fox and The Independence is officially released into the wild. Thanks so much to everyone for their support, especially the brilliant team at Unsolicited Press for all the time and hard work put into the book’s creation and promotion, and to Erin B. Lillis for the rockin’ cover art (and upcoming audiobook version)! Putting this book out into the world has been a goal I’ve worked hard towards over the past few years, and to see everything finally coalesce has been so fulfilling.

“If rebellion is what you like, then you will LOVE Corin’s book. I read to the end and wanted more!” – Miriam L.

The book also received a shout-out on Tor.com’s list of new genre-bending books available this month.

An excerpt is up at Medium.com.

For press information, get in touch with Unsolicited.

Want a rebel playlist to go with your rock n’ roll revolution? Saint Fox and The Independence is all about the power of good music, so here’s a YouTube playlist of some hot tunes that inspired the book.

Looks like we’re about ready for lift-off—The Rise of Saint Fox and The Independence is set to be released on June 12, and a couple of things are on the horizon in line with the book’s promotion. First, I’d like to call attention to an article you can spot through the passenger’s side window, “The Beauty of the Present Tense,” published on Medium.com, where I meander through my affinity for the present tense in writing, the meditative aspects of “being present,” and what the lack of verb tenses in the Chinese language may mean.

Next up on our left, a pre-release interview with me is up on the publisher’s website, short and sweet. Thoughts on writing, fears, and why Philip K. Dick wouldn’t like my cooking.

An announcement of the book’s release, including a brief, flattering blurb from an editor at Lone Wolf Press, is up at broadwayworld.com.

And, if you happen to be in the Orange County area, I’ll be reading an essay live for 1888 Center’s Why We Write Roadshow on June 20, tickets available via the link.

The Rise of Saint Fox and The Independence—about a financial revolution made possible through love of rock music and a little bio-technology—is available for pre-order on the publisher’s website, Amazon, Barnes & Noble, Books-A-Million, AbeBooks, IndieBound, and a few other landing zones.

Thanks for your support; it means a lot. See you on the other side.

I began writing The Rise of Saint Fox and The Independence in December 2013, or so my computer tells me. That I don’t remember. What I do remember is when I got the idea for the book, driving up to Northern California to visit my best and dearest friend from high school. While listening to Bowie’s “Scream Like A Baby” (he is, of course, one of the most excellent among storytelling songwriters), the characters from that song began to take on a life of their own for me. I found myself having to pull over onto the shoulder of Highway 5 to jot down ideas, a scrawled rush of character names and details on the back of a gas station receipt. I hadn’t intended to write this book, but here it was.

I have always been inspired by music and musicians. Though not much of a musician myself, only able to squeal out basic chords on my little Fender Strat, it’s in music, and particularly skilled lyricists, that many of my ideas for writing take shape. When I was driving up that highway five years ago, a sort of narrative began to weave itself among the songs coming through the speakers. Leonard Cohen’s “First We Take Manhattan” was obviously a war cry, a place to begin. Radiohead’s “You and Whose Army?” showed me what the fictional band’s fan base, my own army, would look like. And throughout it all, the heart of the book, the motif that repeated, was and is this:

What if we could take the passion of music, that universal energy, that gorgeous, glittering feedback loop created between spectator and spectacle in live shows, and channel all that energy into something tangible, into changing the world?

What if fans really became an army? What could that army do? Think of the kind of change we could affect with that sort of universal power that emanates from us, from the speakers, from the squeal of steel strings, the battle cries of a hundred thousand voices as they shout out, “This is what you get, when you mess with us” (a pinnacle moment during “Karma Police” at any Radiohead concert). Generate that energy, that strength, that oneness. Bottle it. Sell it. Change the world.

I have always been partial to performers who do just that—perform, drowning myself in everything glam rock and energetic, bright and illuminating, favoring rock icons of old, your Bowies and Jaggers, over those staring at their sneakers up on stage.

You know, in any of your rock icon archetypes, there is a ready-set revolution leader.

In writing Saint Fox and The Independence, the concept of a rock n’ roll army ended up colliding with a financial revolution.

The way I write, I let the story lead me, so when I started this project years ago, I didn’t know that’s where this was headed, but it was where it was always meant to go. Cryptocurrency, Bitcoin, was only on the periphery of my knowledge, but somehow it made its way to the forefront in this story as the salvation of a near-future, rainy, glammy England—home of so many of the greatest rock bands, and the story began to really take shape.

So there you have it—a bit of how the book was born, from the stage, the road, from a few scribbles on the side of a highway. The book is set to be released in June by Unsolicited Press, who came to me at just the right time as I turn my gaze now towards future projects, in the midst of working on this book’s sequel, among other things. Here I’ve included a pdf excerpt of the book if you’d like a sneak peek at what’s coming. If you have questions, are interested in reviewing the book, or just want to let me know which rock n’ roll band you find most inspiring, don’t hesitate to get in touch.

Oh, and I’ve also been tweeting (into the void) the playlist that helped me write this book, and compiling the songs in a list on YouTube as I share them, since these songs and artists have played such a big part in this creative process.

That’s it for now. Next time, (maybe) the editing process—how to take your gas receipt scribbles and strangle them into something cohesive and intelligible.

All hail the beauteous cover art for The Rise of Saint Fox and The Independence, designed by the one and only Erin B. Lillis! We’re talkin’ digital glam rock and it’s everything I wanted. If only I could actually buy this guitar! The book is now available for pre-order on the publisher’s website if you want to check it out. Exciting.

Keep on rockin’ in the “free” world,
– Corin