The Doomsday Edition of Subtopian magazine is now at subtopian.com. My Subterran story for this month is one which doesn’t take place in the club at last, rather in a sinister retirement home that isn’t what it seems.

Also thanks to Eric Lawson for contributing a poem to this month’s issue which ends with the line ‘Love cannot find me tonight because she’s stranded somewhere out on the f’ing 405.’

The short story “Ichiban Marie Clairevoyant’s Soulkiller School” is featured in Subtopian Magazine’s October issue. Head on over to take a look. Subtopian features content relating to our current state of affairs, and how they indicate a move towards either a Utopia or a Dystopia.

Subtopian is also looking for new writers as we expand in content and community. Find out more here on facebook.

I conduct experiments on the fly. Nobody knows about them and 75 percent are failures. When something does hit though, oh boy. It’s like all the Generik card-giving days at once. Like knowing you’re smarter than everyone else in your class. It’s like being plugged into an electric socket designed specifically for satisfaction. Things start moving into place and you can’t turn back.

I was twelve when I had my first big success. Invented a love-o-meter that analyzed how truly in love a pair of individs were, by means of chemical responses in the brain and so forth. I tested it on my mother and father. This was followed by crying, shouting, and a stubby lawyer with parts of his beard missing.

My mother made me put the machine away, and from then on I had to invent in secret….read more at Subtopian

Vol. 5 of Subtopian Magazine is out. This month it features the short story Hypocrite Wedding, set in the universe of my someday-forthcoming novel, Subterran. So come on down to Infrastratos Headquarters, we have complimentary Gummy Tummies for your everyday needs–pop just a few of these and you’ll be ready to dance the night away.

My novelette, The True Unerring Secrets of Utopia, is in this month’s issue of Subtopian Magazine; a cautionary tale about what happens when you stay in one town for too long.

“Ed had both won and lost the Cold War. He was the local authority on everything, was there when the town was founded and when it burned down seventeen times. He didn’t care that everyone he had once known had gone missing; he never liked them anyway. Ed’s wife Sallie was an 107-year-old barmaid. She had the most perky little breasts and golden blonde hair that went on for days. They could both remember when postage stamps were 9 cents. Ed went through a period in his life where he preferred boys to girls and that’s how we got to know each other. Every time I looked at him I thought of an Old West saloon, all guns and poker and whiskey you could run your car on. I used to fantasize that he owned a cathouse and that I worked for him and was his favorite. You’d think he would chew tobacco a lot and barbeque hot dogs but he was a vegetarian. I never really knew Ed. He was a permanent resident in town but he always seemed to be away on vacation.”

Read the rest here if you desire, and have a gander at some of the other great stories, poems and articles housed in Vol. 4. 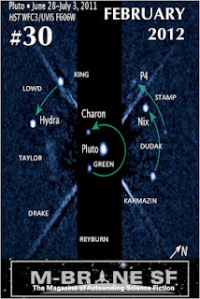 A lovely publication called M-BRANE SF has included a short speculative fiction piece of mine called “Endangered Species”. You can download a free pdf of the issue here. Lots of other great stories here too, much thanks to the editor, Chris Fletcher, for all the time and hard work he obviously puts into this magazine. Being a writer whose work doesn’t always fall neatly into straight-up sci-fi or literary genres, I really love how M-BRANE leans toward cross-genre work, and pieces which are more cerebral and character-driven rather than gimmicky.

“Endangered Species” is a story about what happens when you spend too much time on the internet. It’s only two pages long, so have a quick read and enjoy!